“College students are our future. Why are we putting them in significant danger where they should feel safest?” -Clark Jacobs, Co-founder, Rail Against the Danger, TBI and stroke survivor.

What do these injuries make you think of? Maybe football? Or a horrible car accident? Domestic abuse?

Nope! It’s a little more mundane than that. Try slumbering college students tumbling out of their bunk beds.

I kid you not. Many college students are suffering from serious and sometimes fatal injuries after falling out of their lofted beds. And according to studies in the Journal for Injury Prevention and Pubmed, it’s a real problem with grave if not catastrophic consequences.

College Students Are Getting Injured Falling Out of Bed

So what kind of numbers are we talking about? According to a September 2019 article in the Journal of Injury Prevention:

Nationally, they found a total of 639,700 emergency department visits for bunk bed injuries between 2006 and 2015. Of these, 8,200 (1.3 percent) occurred at schools. …About one-fifth of injuries involved alcohol.

And according to one advocacy group dedicated to eliminating this problem, the number of injuries is on the rise. The Rail Against the Danger website states that:

A recent study released in May 2018 shows some startling numbers regarding ER visits from bunk and loft bed falls. The study (2007-2016) that was focused on injuries from the educational setting showed an almost 100% increase in the number of ER visits. The prior study completed in 2008 documented 36,000 cases vs. 71,000 in the newer study.

Young adults ages 18 to 21 suffered from bed-related injuries twice as often as 13-16 year-olds, with falls being the reason 75% of the time.

Those numbers are compelling. Especially when you consider how simple the solution is to this problem. So what’s the solution?

Well thankfully there is a simple solution to the issue.

Yep, that’s all it takes to prevent restless sleepers—or intoxicated sleepers in some cases—from falling off beds that are lofted sometimes as high as 7 feet off the ground.

Why Does It Keep Happening?

So why the dramatic increase in falls and emergency room visits? And why aren’t there more guardrails on college bunk beds?

There are a few reasons for this.

First, students need more space. Why? Because schools are fitting more and more students in less space. This is a reliable way for schools to increase occupancy and improve their bottom line.

They also do it because homelessness among college students is a growing issue, and institutions of higher education want to offer a place to call home to as many students as possible.

So with limited floor space, students bunk their beds high, sometimes 7ft up, in order to fit more stuff beneath. Think dressers, desks, and wardrobes.

Also, for some schools the cost of adding guardrails to all the lofted and bunked beds on campus can get expensive. And until recently there hasn’t been an issue serious enough to compel them to standardize guardrails.

There Are No Regulations

There’s one more piece to this puzzle surrounding bunk bed injuries. Amazingly, there are no regulations that governs bunk beds in institutions like prisons, the military, or colleges. Unlike bunk beds for children, there are no safeguards for institutional bunk beds.

According to Lara McKenzie of the Center for Injury Research and Policy at Nationwide Children’s Hospital in Columbus, Ohio:

Federal regulations regarding bunk beds don’t apply to institutional beds featured in college dorms, prison and the military, she noted, due to the cost of compliance and low benefits. For college students in particular, it’s up to the consumers themselves to ensure their beds are safe.

As I said before, the shame here is that the solution to this problem couldn’t be simpler. Four hundred people die from bunk bed related injuries each year!

But consider that for most college students, adding guardrails isn’t very cool. To most young adults at University, a guardrail seems like an appropriate solution for a toddler.

And it’s fair enough to see it that way…until you hear dramatic stories like those of Georgia Tech sophomore Clark Jacobs or San Diego State University freshman Dylan Hernandez.

Then you start to realize that the stakes are higher than you previously imagined.

So how bad can it get? In short, injuries sustained from falling out of bed are potentially fatal. In the case of Clark Jacobs, a healthy 6’5’’ sophomore at Georgia Tech, he escaped with his life…just.

Clark fell from his loft bed in the middle of the night and hit his head, fracturing his skull. As a result, he suffered a stroke, had a brain bleed, and slipped into a coma for three months.

Throughout the ordeal, the doctors and Clark’s family didn’t know if he was going to pull through.

When he did eventually wake up, Clark had to relearn everything: how to eat, how to walk, how to bathe himself…literally everything. He needed 18 months of intense physical rehabilitation to get back to anything resembling a normal life.

Thankfully, after two years, he was able to return to Georgia Tech and resume his studies.

But not without great difficulty. He still suffers from extreme fatigue and headaches. But now, in addition to his studies, Clark co-founded an advocacy group with his mother called Rail Against the Danger (RAD) to address the issue.

The RAD website includes accounts of other accidents like his, where students were gravely injured and even perished after falls. It also features a wall of shame and fame to hold schools to account as RAD pushes to standardize guardrails on bunk beds.

And they’ve had some real success.

According to the 11 Alive news site, in August 2017, in response to Clark’s experience and RAD’s advocacy, the University System of Georgia started requiring campuses statewide to offer bed safety rails to students for free for the first time.

But that was one small step in a much larger landscape.

In November 2019, the issue was again brought into sharp relief with the tragic death of San Diego State University student Dylan Hernandez.

According to an article in NBC San Diego,

The Medical Examiner said Hernandez fell from an elevated bunk bed in his dorm Thursday morning and was helped back to his bed. Later that morning, he was found not breathing and pulseless by his roommate and 911 was called. The death was ruled an accident and the cause was ruled accidental blunt force trauma to the head, the ME report said.

Allegedly, Hernandez had attended a fraternity party that night. It’s still unclear whether alcohol was involved. Understandably, students, parents, and alumnae at SDSU are deeply troubled by the incident.

And now the school is under increasing scrutiny as a whistleblower has come forward with accusations that SDSU isn’t taking adequate precautions to prevent these kinds of accidents.

In an article on NBC San Diego,

A whistleblower has lodged a formal complaint with the U.S. Government over the safety of the bunk beds at San Diego State University (SDSU) following the death of a 19-year-old freshman on November 7.

The complaint – obtained by NBC 7 Investigates – was sent to the Consumer Protection Safety Commission on November 18 from an anonymous parent of an SDSU student and former alumni.

In response to these allegations, SDSU posted the following statement on its website:

“All lofted beds and bunk beds located within San Diego State University residence halls are produced by national manufacturers and meet California State Fire Marshal requirements. Rails are installed on the top of all lofted beds and bunk beds in all SDSU on-campus housing. The beds and any affixed safety rails, ladders and kits are both attached and inspected by professional maintenance personnel before the start of each fall semester and also during the winter break.

But here’s the thing. This is not an isolated incident at all. Instead, it’s the latest in a long list of annual bunk bed-related injuries and deaths.

And one thing is clear from stories like this. Schools need to start installing guardrails. It’s also evident that, despite meeting California State Fire Marshal requirements, the guardrail on Dylan Hernandez’s bed wasn’t high enough.

Despite existing standards, there are simply too many examples where guardrails proved insufficient to stop a student rolling out of bed. And hard as it is to believe, many guardrails provide zero protection for students.

In the end, we can’t underscore enough the importance of this one point. When you’re buying guardrails for your beds, they need to be high enough to prevent falling.

And the responsibility for this lies with the schools. 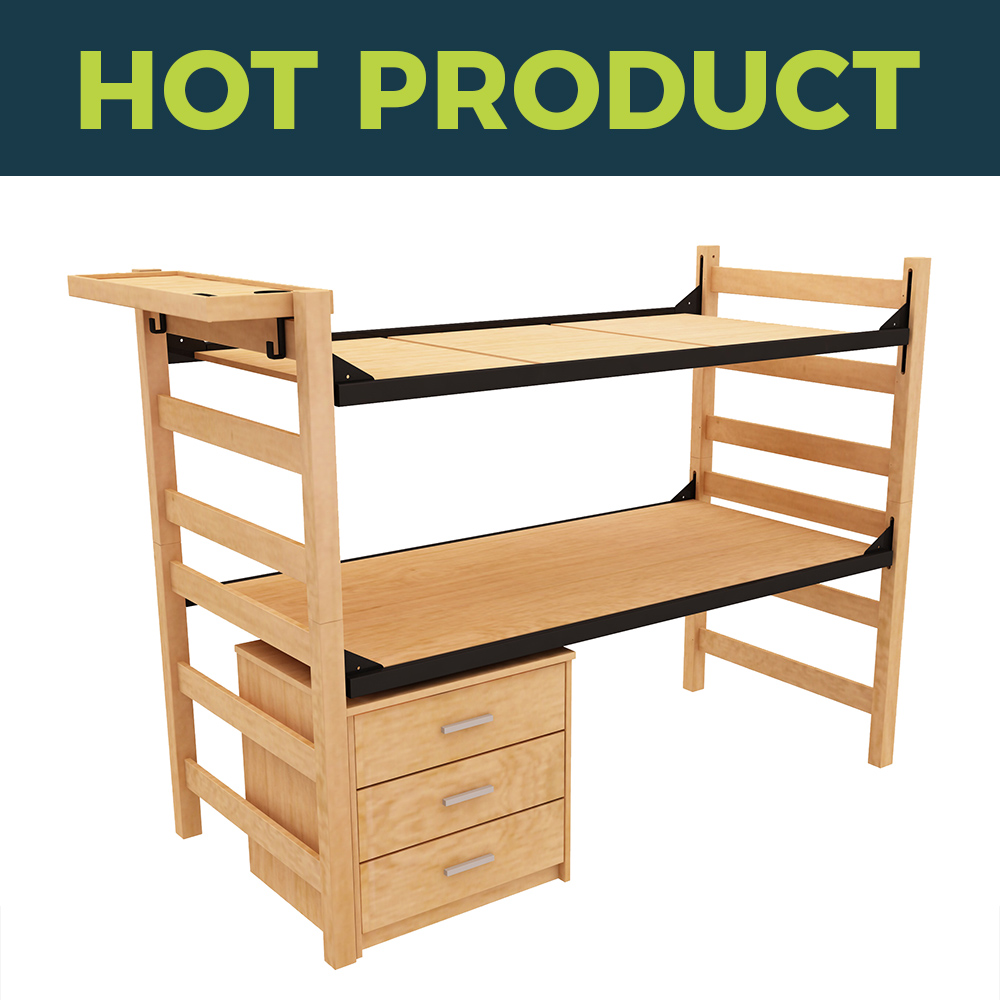 The Smart Shelf is a perfect sidekick to expand the function and convenience of your bunk environment. You can store your bedside essentials within reach and charge your devices while still browsing. Grab a bottle, a book, or your phone. Relax, recreate, or get to work!